Full Video Review – It’s a long one, also I did really well that match… sooo I dunno… I still think there are better choices though.

About
The Scholar is a Trials of Osiris scout rifle. It falls in the high impact, slow fire rate group of scout rifles… much like the Gheleon’s Demise, Badger CCL, and the A.1F19X-Ryl.

See the stats and full perks available at DestinyDB.com 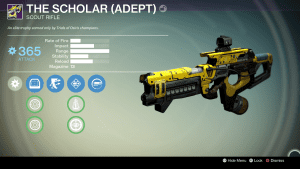 Perk List
Since it is a Trials of Osiris Weapon we can’t reforge it at all… Lord Bungie has already decided the best perks for it.

Let’s break it down into Pros and Cons.

Pro
High Impact
Great choice of scopes for different engagement distances
If it is an Adept version it comes with Elemental damage like solar, arc, or void

Conclusion
It’s a reward weapon that you get from Trials of Osiris, a PvP game mode, so you’d think that the weapon would work really well in PvP right? Well I don’t think it does. It fires way to slow to be useful in any distance closer that midrange and it only holds 13 rounds, so if you’re really good you might be able to string two, maybe three kills together without reloading. Having all the different scope types and perk choices are nice, but I think the slow fire rate just kills its performance in PvP. I had a blast playing with it in the Combined Arms Playlist of multiplayer maps, but that is because those maps are HUGE. You can just sit and plink forever… it was actually really fun. All the other map playlists were not fun.

However, for PvE it is a different story. If you can get an Adept version with Elemental damage this thing rocks… you can engage enemies at long range distances and do the max damage possible for a scout rifle. Reloading and magazine size aren’t really an issue in PvE as you can just take cover and get it done.

So for PvP it’s not good, but for PvE the Adept version kicks ass.

Thanks for checking out my review, please leave me a comment!