In Tarkov, using the right ammo for your situation is the difference between winning the fight and hoping you get your equipment back from insurance. All of the ammo rounds in Tarkov have many different stats applied to them, but there are really only two stats that we are going to focus on here.

Your friends, streamers, whoever your asking might just be telling you to run a certain round because it’s the best, but here I’ll explain why they are the best so you can pick ammo depending on your fighting style.

In my opinion, the two most important characteristics of a ammo round, are the Damage and the Penetration value.

Top tier ammo will generally have very high flesh damage and high penetration value, but they’re very expensive. Right now M995, top tier 5.56×45, goes for around 900 roubles a round. Carrying 3 mags and an extra 30 rounds can cost you in upwards of 108k roubles. This is a ton of cash especially for beginners.

When to use High Penetration Ammo
If you plan on fighting THICC bois(highly geared players), you’re gonna want high pen ammo. Something that will pierce level 4 armor and up. The high pen ammo won’t always be a one shot kill in the chest or helmet but two or 3 is pretty much gonna put them down. The thing about high pen ammo is, it’s designed to zip through armor quickly and cleanly which means it will zip through flesh cleanly and not do a lot of tissue damage on its way out. If you’ve got the cash, run the high pen ammo and aim for the chest and head hitbox.

When to use High Damage Ammo
If you’re really on a budget and just can’t afford the high pen ammo, there is a time and place for the high damage rounds. Shotguns with buckshot is very effective against legs, arms, face, and will one shot an unarmored chest. There was a leg meta time when the top tier strat was to shoot geared players legs out. If you black out an enemies leg and keep shooting that same leg, it spreads the full HP damage loss across the entire body.

Here is a quick ammo chart showing the best ammo as of .12 patch. These values generally change so always look for the most up to date chart. 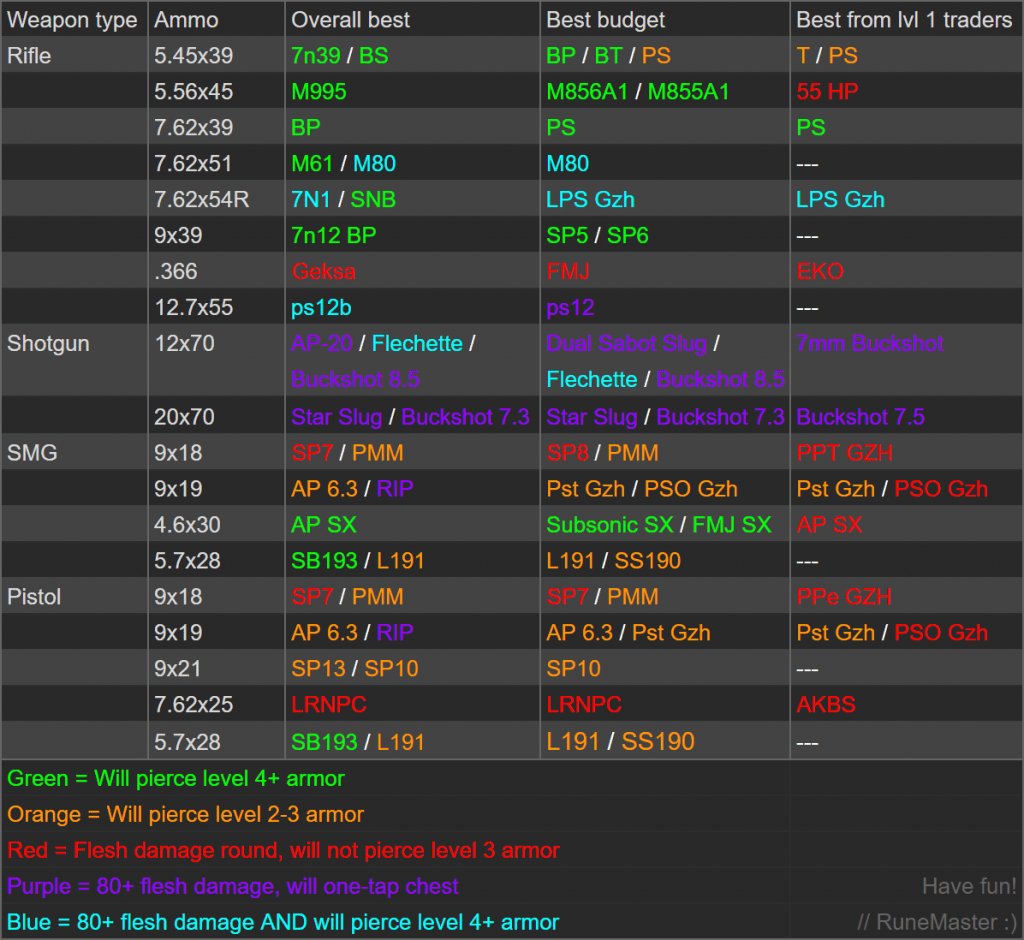 For a more in depth chart showing all the different damage and pen values, Click Here. I actually printed this out and keep it in a folder on my desk for quick reference.

Conclusion
If you’re gonna fight level 4 armored players and higher, and you generally go for chest and headshots, use the expensive high penetration value ammo.
If you have the discipline to shoot legs and arms or if you’re say just gonna go scav hunting, go for the cheaper high damage ammo.

Hit me up if you have any questions at our new forum EFTguides.com.