Whats up Guardians, this is MarkTheShark2k from FragThePlanet.com with a review of the Snakebite Surgeon Fusion rifle. You can get this weapon from running the Dragon strikes, but be prepared to spend a little time doing it. I ran nearly 50 strikes this weekend and I got two to drop for me.

Lets get into the meat of the review. There are pros and cons to this weapon and we’re going to cover them both, and also what I think are the best possible perks you can get. 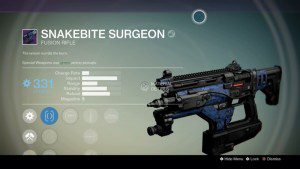 The stats of the Snakebite are as follows:
Charge Rate 19
Impact 90
Range 40
Stability 64
Reload 62
Magazine 5

This Fusion fires 7 Pellets and does 47 damage per pellet, so you can pretty much kill anyone in the crucible by getting at least 5 of those pellets to land on target.

This fusion rifle falls under the High Impact Archtype with its impact rating of 90 and the max of any fusion is 97. You can see how this stacks up to other fusion rifles at www.destinydb.com.

I rolled my fusions to make them viable for mainly PvP… it is possible to get a good PvE roll but I honestly don’t see the point in using fusions in PvE when pretty much any shotgun outperforms it. However because range plays a huge part of online multiplayer you can actually kill shotgunners before they can get to you.

The two Snakebites that I have are Hidden Hand, Hand-Laid stock, Rangefinder and another with Hidden Hand, Braced Frame, Grenadier. It is very important to get a perk that gives you max stability because that is how you will be able to get all the pellets to land on target giving you the range advantage.

Most people, including myself, thought that having Accelerated Coils (Charges quicker to get the shot off) and any perks increasing Range what you want, but Actually that is incorrect. Accelerated Coils, even though it doesn’t seem so, takes your damage down from 47 to 42 damage per pellet, and If you don’t run max stability the pellets actually end up spreading out to far apart that the only targets you’ll actually kill are in shotgun range… once again negating the fusion rifle.

So roll for max stability and max damage and that is how you can make fusion rifles viable again in PvP.

In conclusion, the Snakebite Surgeon is a great High damage Fusion rifle and because of its High base Stability of 64 that you can max with either Braced frame or Hand-Laid stock and get kills farther out than shotguns or even Auto Rifles. However if you don’t want to run a billion Dragon Strikes in the hopes that you’ll get one, the Vanguard Quatermaster in the Tower sells the Give/Take Equation which has almost identical perks.

My God Roll would be Hidden Hand, Braced Frame, and Icarus, Grenadier, or Army of One.

Thanks for checking out my review and I hope it helped you out.