Since going green seems to be the thing to do now, I figured I’d jump on the bandwagon and do my part.  Ever since I got my new netbook I have been leaving the charger plugged in 24/7 and I’m starting to feel a bit guilty about it.  I could just crawl underneath my bed, find the plug and unplug it every morning before I leave for work, but what would be the point of letting an electronic control my life.  That and I’m lazy.  It’s easier and more fun for me to take 20 minutes or so and build a nice little switch I can place anywhere that controls the power flow.  I figured that If I could put a switch to turn the power on and off as close to where I plug my devices in it might be something I would actually do.  So that’s what I did yesterday, I bought some parts from the local Lowes and got busy.

You are free to check out the pictures and directions below, but be warned, do not attempt this project if you don’t know what you’re doing.  There is a very good chance you’ll end up as a brown smoldering stain on the carpet if you’re not careful.

After all the parts this project cost me around ten dollars.  You might have some of this stuff lying around the house so it might cost you less.

Here are the parts I got from Lowes. 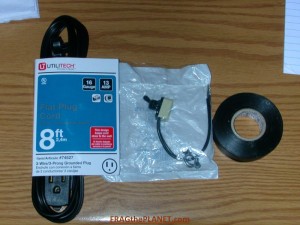 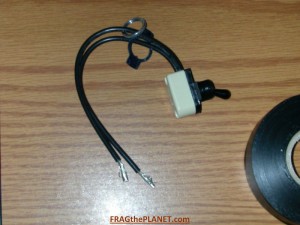 Before I hacked up the extension cord I called my pops up on the phone to pick his brain about the best way to wire up the switch.  He told that the wall sockets have one large prong slot and one small prong slot, and that I should install the switch on the wire that goes into the large prong.  I took out my wire strippers and got busy hacking up the cord. 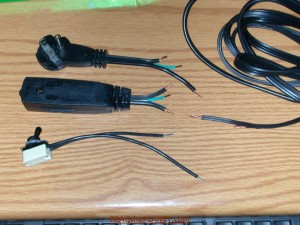 I staggered some of the cuts so I the butt connectors wouldn’t be in a huge bunch.

I cut pretty close to the ends so I could keep as much cord as possible for the switch end. 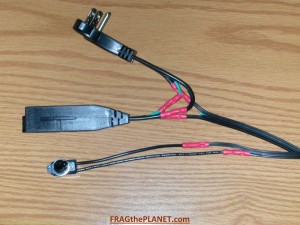 Here is the setup tested and working great, I used 18-22 gauge butt connectors. 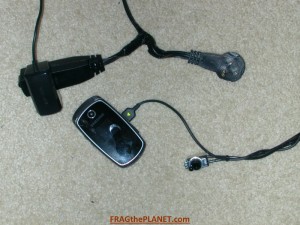 Here is the final setup, I zip tied the cellphone wire to the cord with the switch just a few inches away from the cellphone end.  I finished it up with some black electrical tape, some heat shrink tubing would work nicely here too and give it a nice professional look.

Now that the switch is right where I plug and unplug my cell phone I’ll be sure to use it every time I plug in my cell phone.  I also plugged my netbook charger into one of the free spots on the plug end too.