After playing around with Windows 7 inside VirtualBox for a bit on my Asus N10J-A2, I decided I would go for the real thing and upgrade from the factory installed Vista.

This is a look at my experience installing Windows 7 on my Asus N10J.  Screenshots included 🙂

I am not a fan of Vista and it definitely gave me a run for the money trying to get Win7 installed.  The first method I tried was to mount the Win7 ISO using Daemon Tools and run it from a virtual cd drive, but that left me doing alot of waiting for loading screens and most of the time the system would just become unresponsive.  I then tried running it from safe mode and got a bit further in the install but then it failed after notifying me that Symantec Endpoint Protection wasn’t compatible with Windows 7, thereafter failing the install.  Unfortunately for me Vista would crash when trying to uninstall Symantec, so tack on another hour or so of manually removing registry entries and dll files until I finally had Symantec uninstalled.

Even after satisfying all the requirements to install Windows 7, I still could not get it to install from Daemon Tools.  The only way I found to get the install to work was to use UltraISO and extract all the files to a folder on the Hard Drive.  Finally it began to install!

The install took about an hour and a half to complete, but because I did an upgrade instead of a fresh install I didn’t have to install all the N10J specific drivers.  So that was a huge plus.  The only driver I did need to install was the Windows 7 version Nvidia drivers for the 9300M GS.

All in all I’m very happy with how Windows 7 is running, it is worlds better than Vista and It just might end up being my main OS on the Asus, I still have XP in dual boot on here just in case.

Check out the screenshots below for a look at the OS on the N10J. 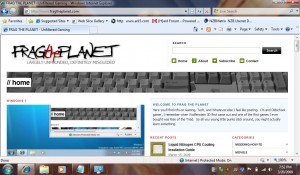 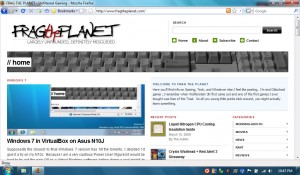 I was able to score a few extra pixels for viewing webs after turning small icons on in the taskbar, switching to FireFox, and installing the GMarks and Hide Menubar addons. 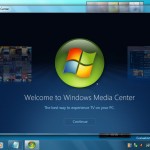 Here is the Windows 7 Control Panel and the included Media Center.