About
The Radegast’s Fury is a Iron Banner rocket launcher. It falls in the high blast radius group of rocket launchers.. much like the Admonisher III, Tomorrow’s Answer, and the Ash Factory.

How To Get It
You can get it from Lord Saladin in the Tower during the Iron Banner if he is selling it, or as a random drop while playing in the Iron Banner.

See the stats and full perks available at DestinyDB.com 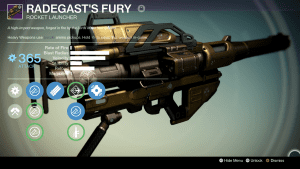 Best Perks for PvP
Stock it comes with the highest blast radius available, only one round in the chamber and middle of the road velocity. We can’t roll perks that increase rate of fire, and reload speed and stability are unimportant on a rocket launcher, so we are going to reforge for higher velocity, blast radius, and magazine size.

Here is the break down of my perk choices and what to reforge for.
Hard Launch / Aggressive Launch – Increases Velocity and Blast radius, but increases recoil.
Tripod – Launcher can hold 3 rounds in the tube (instead of just 1).
Javelin – Increases Velocity.
Grenades and Horseshoes – Rockets detonate early based on proximity to targets (allows you to fire without having to aim down sights).

Conclusion
Even though the Radegast’s Fury comes stock with mediocre velocity and the smallest magazine available, because of the perks we can roll for, you can really push the blast radius and velocity to the max. Also with tripod you can up the magazine from 1 to 3, making this a great heavy weapon to take with you in the crucible. It is my second choice for rocket launchers that I take into pvp. I actually prefer my Admonisher III over it, but only just barely.

Thanks for checking out my review, please leave me a comment with the perks you use and like or if you want a review of a certain destiny weapon let me know, thanks.