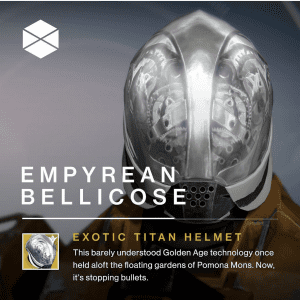 Empyrean Bellicose
Titan Helmet
Fly like the shadows with the Empyrean Bellicose. Aiming your weapons while in the air will hold you in place for a short time. Orbs collected when your Super is full will recharge your melee ability. 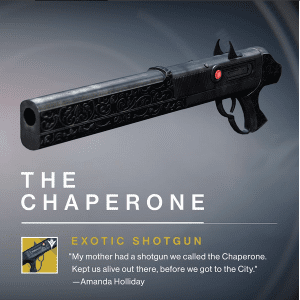 The Chaperone
Shotgun
The Chaperone Exotic shotgun fires a single slug shot and grants an Agility boost when equipped. Your precision kills will grant a brief incease to Handling, Range, Rate of Fire, and Stability. – Xûr, Agent of the Nine 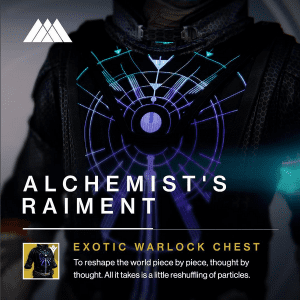 Alchemist’s Raiment
Warlock Chest
Warlocks: reshape the world and turn iron to gold with the Alchemist’s Raiment. Collecting Primary Ammo will give you a chance to gain glimmer. Orbs collected when your Super is full recharge your grenades and melee. – Xûr, Agent of the Nine 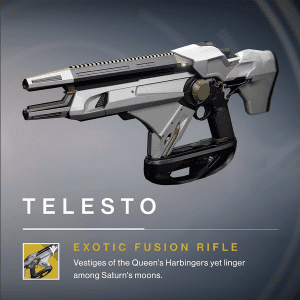 Telesto
Fusion Rifle
An end will come, Guardian. Bring it about sooner with Telesto, a vestige of the Queen’s Harbringers. This Fusion Rifle will attach projectiles to your foes and detonate with a delayed Void blast. Multikills with this weapon will drop Orbs for your allies. – Xûr, Agent of the Nine 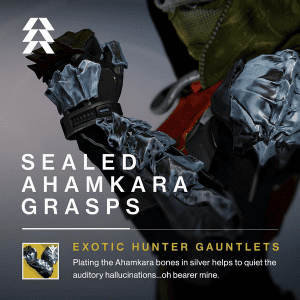 Sealed Ahamkara Grips
Hunter Gauntlets
Hunters: these Sealed Ahamkara Grasps are filled with Nightmare Fuel. They will provide you with an additional melee charge and your melee damage will have a chance to reload your Primary Weapon. – Xûr, Agent of the Nine 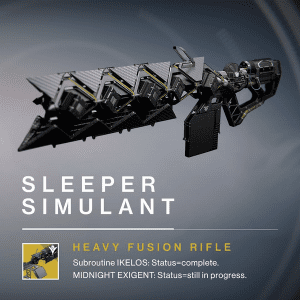 Sleeper Simulant
Heavy Fusion Rifle
I can not endure this place any longer… Before I depart, a final offer for you. Sleeper Simulant: a Fusion Rifle equipped in your Heavy Weapon slot. This weapon’s laser tears through enemies and ricochets on hard surfaces. – Xûr, Agent of the Nine